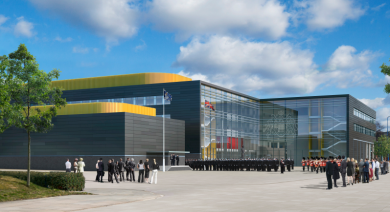 Woodlands are pleased to announce that we have been selected by MACE to provide all of the site temporary services at Hendon Police College.

Once again Woodlands will be at the cutting edge when it comes to the site lighting, using their low energy LED 48 volt system.

The new training centre will involve demolition of existing buildings and construction of two buildings, with one up to four storeys in height.